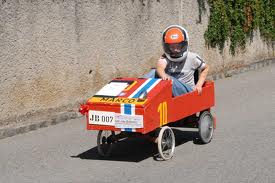 When I was about 4 years old, my Dad built me a race car that would coast downhill at a pretty good clip. It was very cool. I remember how we first decided to build the Racer. Dad was a Medical Doctor in the Air Force and we found an old Jeep steering wheel in a junk heap; that was the start of our vision. It was so exciting! My Dad could build anything and so we went to work. In what seemed like no time at all, we had ourselves a championship soap box racer. I can still remember it in vivid detail - more than 50 years later. It was black, had red hub caps, a great big black steering wheel and it even had brakes. Wow!! I was the star of the neighborhood.

Today I had a blast from the past. As I walked my dog on trash pick-up day, we saw that someone had discarded their homemade racer. Just looking at it, took me back 50 years in time. As I studied the mechanical marvel in front of me I made several interesting observations.

First, there must have been a dream that brought this contraption into being. I imagine it had to do with a father and a son and maybe a boyhood memory the father wanted to recreate for his own son; or perhaps a son who had a dream of replicating something he saw in a book or on TV. Together they agreed to bring that dream to fruition.

Second, I could see elements of brilliance in the effort. A lot of what sat before me demonstrated a good deal of cleaver thinking; a block that was strategically positioned to keep the front axle from turning too far and causing an unwanted overturn; a rope tied to that same axel to steer it. Both ends of the rope were carefully taped to keep them from fraying and washers strategically placed on both sides of the bolt holding the wheels in place so that friction was kept to a minimum - all very ingenious.

Third, someone had used first class materials to build the racer. The wheels alone would have cost 10$ apiece at a hardware store, expensive long bolts used to hold the lumber together, new 3/8 inch cording for the rope steering guides and pressure treated lumber used as the framework - all showed that someone started out to build a deluxe vehicle. No expense was spared on this little project.

Fourth, there were places where I could see that a child had added his own touches. The most obvious indication was that the seat had been poorly nailed in place. This is the kind of thing a Dad usually allows when he realizes his son wants to help but hasn't had a chance because Dad is doing everything himself; so the son is allowed to drive a few nails in a place that really can't hurt anything... and then there was the green spray paint applied haphazardly in only a few places. again, the father allowing his son to be a part of the project, but his inexperience did not really jeopardize anything important.

Fifth, there were places where I could see that neither father nor son really knew what to do. The strongest indication of this was a lack of any breaking mechanism. I can tell you from my own experience how important that can be! That's when we need to call in the experts or we could get our self in real trouble.

Sixth, I could see that there was a point at which it probably wasn't turning out as well as they imagined. There were a lot of little fixes all over the racer where small pieces of wood had been attached to remedy a little problem or screws had been put in to reinforce the effort as a "Second-thought" and had split the wood or it was broken away. The big idea was in place but the little important touches just were not there to support the grand scheme of things.

And lastly, I found it in the junk heap because they had obviously given up on their dream. Somehow in the building of the race car, enough problems had arisen that it had killed their enthusiasm and the project. The racer looked unused, broke-down and really not very impressive as first glance.

All this was a parable of what so many of us experience in different areas of our life. We start off with a grand vision that inspires us and those around us. We have the big picture in mind and it flows effortlessly as we begin the process. We put our best resources into the effort believing this will be a trophy accomplishment; then the project begins to degrade as we let less talented individuals tamper with our vision. We get out of our depth as we strive to bring the effort to completion and then we cannot finish what we have started because even from the beginning the plan was not fully developed in every detail. So we try to finish but we cannot and therefore become frustrated with ourselves for even taking on such a grand enterprise. And lastly we throw our effort away out of disappointment and sometimes hopeless discouragement.

There is a lesson to be learned from this. "Any enterprise is made strong by wise planning and careful execution. But most importantly don't give up on your dream even when it does not turn our perfectly at first. Learn to perfect your dreams over time as you polish them through experience and determination."

You need to be a member of Marketplace Leaders to add comments!

Please feel free to check out my web site at www.DanielSouthernGroup.com for more about me and what I do. I would love to hear from you.