In 1975, Bill Bright, founder of Campus Crusade, and Loren Cunningham, founder of Youth With a Mission, had lunch together in Colorado. God simultaneously gave each of these change agents a message to give to the other. During that same time frame Francis Schaeffer was given a similar message. That message was that if we are to impact any nation for Jesus Christ, then we would have to affect the seven spheres, or mountains of society that are the pillars of any society. These seven mountains are business, government, media, arts and entertainment, education, the family and religion. There are many subgroups under these main categories. About a month later the Lord showed Francis Schaeffer the same thing. In essence, God was telling these three change agents where the battlefield was. It was here where culture would be won or lost. Their assignment was to raise up change agents to scale the mountains and to help a new generation of change agents understand the larger story.

Hi my name is Philip Wendell Paloma. You can call me Levi! I am a community Pastor here in…Continue

Are You Called By God to Start A Business?

Having a passion and a desire to start your own business and being successful is not bad!…Continue

Can "Church" & the "Marketplace" mix?

You need to be a member of 7 Cultural Mountains to add comments! Comment by Martin Allan on March 1, 2011 at 5:38pm
Whilst we view everything through our own perspectives & worldviews the Family Mountain is the one where everyone has different experiences. There may be similarities between some but vast differences between others.

Comment by Os Hillman on March 1, 2011 at 3:15pm
Recent power point slide i have been teaching from to demonstrate the heirarchy of the 7 mountains. 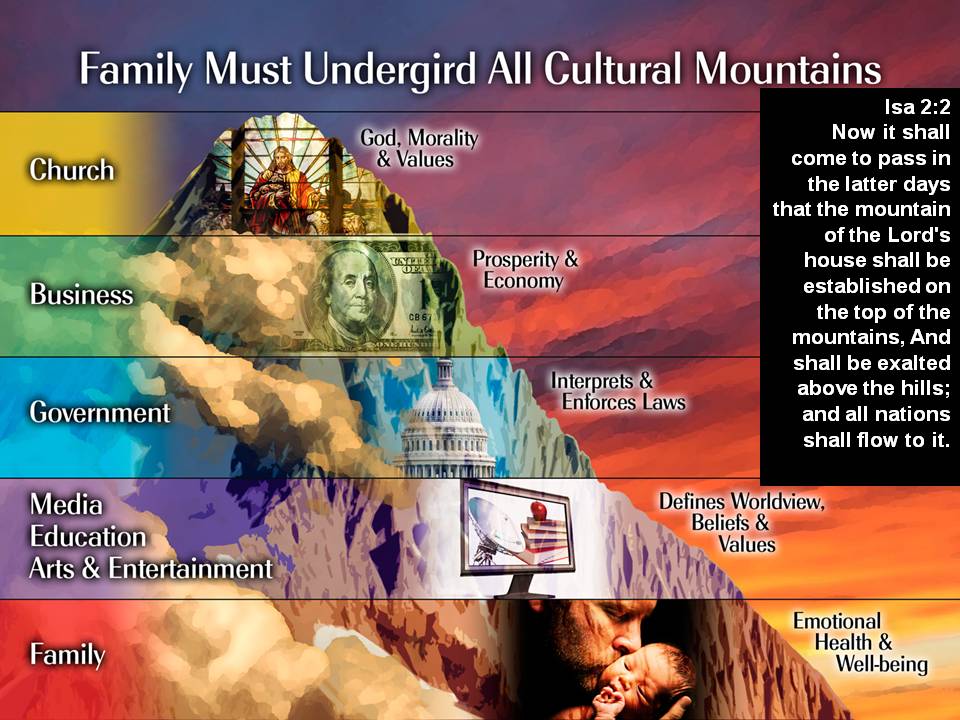 Comment by Robin Lawrimore on October 17, 2010 at 8:56pm
Romero's prayer certainly puts our individual efforts in perspective. While I do what only I can, God adds my life to others and certainly multiplies the results spiritually in ways I cannot imagine or foresee. It reminds me that my efforts are supposed to be incomplete, but a part of the bigger picture eternally. This is a pressure reliever.

Comment by Martin Allan on October 17, 2010 at 5:18pm
Here is a poem/prayer from Catholic Archbishop Oscar Romero entitled "A Future Not Our Own" It was read at a recent Valedictory Service for Year 12 graduates here in Sydney.

It helps now and then, to step back and take the long view.
The kingdom is not only beyond our efforts, it is beyond our vision.

We accomplish in our lifetime only a tiny fraction of the magnificent enterprise that is God's work.
Nothing we do is complete, which is another way of saying that the kingdom always lies beyond us.

No statement says all that could be said.
No prayer fully expresses our faith.
No confession brings perfection.
No pastoral visit brings wholeness.
No program accomplishes the church's mission.
No set of goals and objectives includes everything.

This is what we are about.
We plant seeds that one day may grow.
We water seeds already planted, knowing that they hold future promise.
We lay foundations that will need further development.
We provide yeast that produces effects beyond our capabilities.

We cannot do everything and there is a sense of liberation in realising that.
This enables us to do something and to do it very well.
It may be incomplete, but it is a beginning, a step along the way, an opportunity for God's grace to enter and do the rest.

We may never see the end results but that is the difference between the master builder and the worker.
We are workers, not master builders, ministers, not messiahs.
We are prophets of a future not our own.

Comment by Geli Heimann on September 23, 2010 at 11:43am
Hello Everyone! I am relatively new here on this site, and just read down through some of the comments. I would like to refer to John K. Baw's comment on July 16 re being assigned to more than one mountain. Certainly I believe so.

For example, I have a calling to the family mountain in particular to the marriage and sexual intimacy side. I have served in the ministry for nearly 30 years and relationships have been my focus, especially marital relationships. I am also a psychologist, again with the focus on relationships.

OK, relationships is my "theme" and it spans to the second mountain: "church ministry". As an ordained minister I have had the privilege to serve spiritual leaders in various ways and finally was compelled to do a Masters degree in Business Psychology to be able to give practical insights into organizational relationships, effective team building, etc.

Trust is a serious issue amongst church leaders, so with them knowing that not only am I a minister, an insider as it were, but also bound by the strict confidentiality laws as a psychologist, I am able to build the trust bridge.

Anyway, as an answer to John, this is my personal take of being on more than one mountain.

Comment by Os Hillman on September 17, 2010 at 9:48am
Os,
I understand the word Culture comes from the root word Cult.

Is it possible that every mountain culture is controlled by a religious
belief?

Isn’t Marxism a religion whose god is matter and every living thing
comes from matter. That the fall is when humans began a free
enterprise system with redemption when governments controlls all
industry?

Os: Every mountain is controlled by a principality. I recommend you read Johnny Enlow's book, the 7 Mountain Prophecy. He covers this in detail in his book. www.tgifbookstore.com