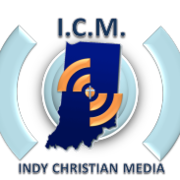 A group of Dedicated Professionals mostly in Central Indiana dedicated to Creating & Sharing Content, News, Events, Resources and Entertainment that helps spread and support the Great Commission via NEW MEDIA


Thank you Scott Bateson for Loving God and Loving People.

It is with a mixed emotions of joy and sorrow that I write this message, Scott Bateson Graduated  this morning around 7:45am from this earthly brain cancer ridden  thirty-something year old body into a heavenly perfect in every way body.  He is now enjoying the arms of our Lord.  He leaves behind his teenage son Luke and the love of his life Audrey in the care of the saints of God, the body of Christ, Our Church.
For those of you who don't know who he is, he is a dear friend and brother whom was chosen to be the first in a series of people that we are currently under way producing called "REDEFINING LIFE" a VIDEO series of testimonies of people who have faced death, are facing death, have a loved one who died, or have Debilitating conditions that they live with daily.
There is a PHOTO ALBUM here on ICM that shows some of our Media Team taping this AWESOME TESTIMONY of SCOTT BATESON , including stories about his wonderful wife, and some of the most fun he has had in raising his son. we have almost an HOUR of testimony footage and are currently working on the arrangements and editing of it for the WORLD to see.
Scott desperately wanted to tell his story with as many people as possible, the fact that he lived as long as he did was a miracle.  Unlike RANDY PAUSCH, Scott had a HOPE, he definitely knew his FINAL DESTINATION and urged as many people as he knew to accept Jesus and join him in eternity.

Scott Bateson's Testimony and project pre-dates this websites existence, it was Scott's inspiration to us to make sure that his message to everyone had the best chance possible to reach the WORLD.  Scott and the other people in the series are the reason this website exists, to Testify, reach, teach, and keep people for Christ.
Memorial Contributions can be made to Jessen Funeral Home in Franklin,
NOTE: SCOTT DOESN'T WANT FLOWERS, he wants you to rather GIVE THE MONEY TO MISSIONS... So the MEMORIAL FUND at JESSEN FUNERAL HOME will be sent to MISSIONARIES worldwide.
P.S. This DISCUSSION will continue to be UPDATED as needed.
To effectively SHARE THIS VIDEO on FB CLICK HERE
Scott's Encouragement, his Story, his Testimony and his Love for Jesus will live on forever, and through his Story, he will have an impact for eternity even after he has gone.
Just imagine, Scott is in his mansion in heaven and "poof" another heavenly reward pops up in  front of Scott, because another person saw his video testimony, read his story, and decided that no matter what they were going through, they now want to place their faith, trust, hope in Jesus Christ.  Because Scott was a Good and Faithful Servant GREAT IS HIS REWARD !!!
Scott was very involved with his son Luke's Life and the video content that is yet to be released shows him candidly talking about this as well as his LOVE for the ALL PRO DAD program which was started by Mark Merill & Tony Dungy and brought to Indianapolis by Dungy.  ICM's own Dennis Tooley was working with IYI as a consultant to help bring this organization to Indiana to have maximum impact.  Dennis is the "Brains" behind the "REDEFINING LIFE" Video series and helped interview Scott ... Dennis was diagnosed with MS (Multiple Sclerosis) not that long ago and really connected with Scott on the phone and in person.  To find out more about ALL PRO DAD, CLICK HERE
Scott was also very passionate about getting involved with children and the YOUTH.  His Passion was to do whatever necessary to reach them. Another ICM member Tina Frankl is also very involved with reaching the Youth.  Tina lost her husband to Brain Cancer recently and was committed to making sure that Scott's Story got out, she was involved behind the scenes in timing and editing the video Testimony of Scott and her story is yet to be told.  Tina has 2 sons and is dedicated to raising them to be Men of God ... That is why she is involved in a very powerful WALK THRU DRAMA called THE 99 - What is the 99?
The “99” is a reality walk-through theater, housed in a 20,000 square foot inflatable air structure. This production helps teenagers and young adults understand the importance of making right choices. The consequence of poor choices is taking thousands of young lives each year. The “99” is a statistic based off the Center of Disease Control, stating there are 99 young people between the ages of 12-24 that die every day from preventable causes… CLICK HERE for DETAILS:  If you are or know a teenager, please do everything you can to get them to go through THE 99 - WWSD? That's what Scott would do.

This group does not have any discussions yet.

You need to be a member of INDY CHRISTIAN MEDIA GROUP to add comments!