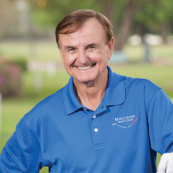 Many of us claim Jesus as our Savior. However, many struggle to have a vibrant,  intimate relationship with Jesus as their friend.

Retired professional golfer Wally Armstrong struggled to see Jesus as his friend. He believed in Him, served Him, but felt distant from Him. Then one day something happened that changed Wally's life forever. He shares it in a book called Practicing the Presence of Jesus. A simple encounter completely changed His relationship with Jesus when he SAW Jesus on the golf course!

Today he shares what this experience led to that has radically changed his life and many others. He speaks across the country sharing his experience.

Join Os Hillman as he hosts a one hour Teleseminar with Wally Armstrong. In this session you're going to discover:

Walter "Wally" Armstrong, III is a former American professional golfer who played on the PGA Tour during the 1970s and 1980s.  Armstrong was born in New London, Connecticut. He attended the University of Florida in Gainesville, Florida, where he played for coach Buster Bishop's Florida Gators men's golf team in National Collegiate Athletic Association (NCAA) competition from 1965 to 1967. Armstrong received All-American honors in 1966.[1] He graduated from the University of Florida with a bachelor's degree in physical education in 1968, and master's degree in public health in 1969.  Armstrong played on the PGA Tour from 1974 to 1984. His best finishes were a trio of second places: a tie for second at the 1974 Sahara Invitational, second at the 1975 Pensacola Open, and a second-place tie at the 1977 Western Open. His best finish in a major was a fifth-place tie at the 1978 Masters Tournament.  Armstrong also played a few Nike Tour and Senior PGA Tour events in 1995 and 1996.  In his post-playing career, Armstrong is a golf instructor and author.

He is a best-selling author of books about golf and the Christian life, including (with Jim Sheard) "In His Grip", "Playing the Game", "Finishing the Course", and an instructional book with golfer Tom Lehman called "Live Hands".

RSVP for Practicing the Presence of Jesus, Teleseminar with Golf Pro Wally Armstrong to add comments!