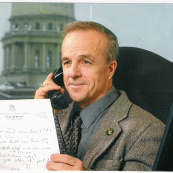 Teleseminar with Fulton Sheen
LIVE CALL Thursday, August 22 at 7pm EST
Will be recorded for future access
Members of our Change Agent Network have automatic access to all of our teleseminars. Learn More

Fulton Sheen graduated from Western Michigan University in 1979. From 1977 to 1991, he owned and managed FJS Enterprises Contracting.  From 1989 to present, Fulton has owned and operated Sheen Financial with his wife Cheryl and daughter Crystal.  Fulton was elected Allegan County Treasurer in 1996 and again in 2000, where he managed the county’s fifty-five million dollar portfolio. From 2002 to 2008 Fulton served three terms in the legislature as Michigan’s 88th District State Representative. While in the legislature he was appointed Chair of the Tax Policy Committee and also served on the following committees: Insurance and Financial Services, Government Operations, Regulatory, Children & Family Services.

In 2006, Fulton founded Isaiah 58:12, a non-profit 501(c) (3) disaster relief and preparedness organization.  Fulton is a certified Community Emergency Response Team (CERT) member and trainer, and has been teaching the FEMA/Citizen Corps CERT course since 2009.  Fulton and Isaiah 58:12 trained over 1500 new CERT volunteers to assist first responders and the community in times disasters.

In this session, you will discover: